Started in 2003, CEJUDHCAN secures indigenous land rights and promotes sustainable land management with communities on Nicaragua’s Atlantic Coast. CEJUDHCAN was part of the team that led the process granting legal control of native lands to natives.

The Miskito communities have been frequently attacked by armed settlers, so many feel unsafe farming at a distance from their homes. CEJUDHCAN trains Miskito women in bio-intensive agriculture so they can farm safely in the smaller areas close to their homes. The agroecology training and materials provide critical food security allowing people to stay on their traditional lands while fighting for their land rights in national and international courts.

Download the CEJUDHCAN case study as a PDF document (784kb)

CEJUDHCAN is a not-for-profit profit, NGO that provides educational programs, legal support and practical assistance to indigenous peoples and afro-descendant communities on the Caribbean Coast of Nicaragua.

CEJUDHCAN assists these often threatened communities with confirming and protecting their communal land rights, and their rights for self-determination and autonomous governance. This includes a focus on identification and titling of communal lands and indigenous territories, linking this to practical training in participation and agroecology.

Vision: The Indigenous Peoples and ethnic communities of the Caribbean Coast of Nicaragua enjoy free determination and guarantee of their individual and collective rights, with gender and generational equity and with access to social, economic and environmental justice in the defence and protection of their territories.

Mission: Facilitate and contribute to territorial governance, justice and environmental safety of indigenous peoples and ethnic communities of the Caribbean Coast, through actions that promote and ensure the protection of collective rights, and the enjoyment of their natural resources with gender and generational equity.

The importance of combining: 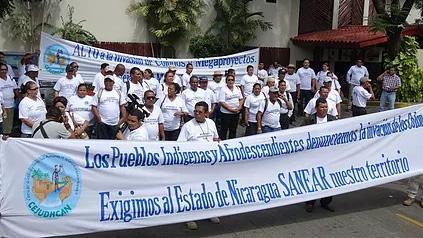 In 1997, the International Human Rights Law Group created an office in the Caribbean Coast of Nicaragua with the objective of strengthening local action and supporting activists in defense and promotion of their human rights.

Their mandate was established in September 2003 through a transition to create a local NGO called the Center for Justice and Human Rights of the Atlantic Coast of Nicaragua (CEJUDHCAN) with a focus on protection and promotion of the rights of Indigenous Peoples and Ethnic Communities of the Caribbean Coast of Nicaragua.

CEJUDHCAN has achieved significant outcomes since 2003, yet its continuing work is as critically important now as it was then. In the last three years illegal settlers, known as ‘colonos’, are accused of carrying out armed attacks on at least 12 Indigenous communities that resulted in at least 34 Indigenous people being murdered, 44 physically injured, 22 abducted and four people reported as missing, plus homes and crops being burnt to the ground, and forest-fires, started maliciously, displacing entire communities.

International corporations are also said to be systematically wreaking ecological damage that is severely impacting the communities’ land and natural resources including government-backed projects in mining, monoculture farming, hydroelectric dams and the controversial interoceanic canal that is planned to cut through the country to link the Atlantic and Pacific.

Massive deforestation, plus the destruction and contamination of the water resources, is compromising the integrity of the territories’ natural resources and the cultural survival of the Indigenous communities … mega-project initiatives, often pushed by international investors, represent a new form of colonisation.

To gain full compliance with the laws that protect Indigenous rights, especially the territorial rights, indigenous governance and management of their natural resources for the benefit of the communities and their residents, we have demanded the Nicaragua State complete the Saneamiento, which means clearing the land of third parties, both illegal settlers and unsanctioned companies, which is the final phase of the titling process. The Government has blocked the implementation of this final step, so thus our struggle continues. 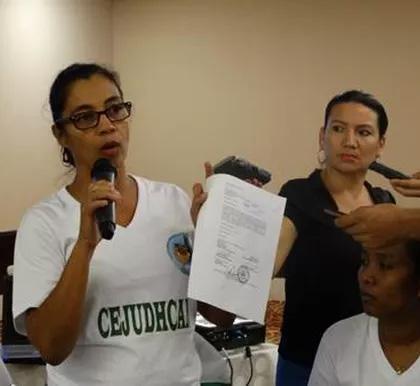 Zayda Pérez, originally from the indigenous community of Uhry, Municipality of Waspam Río Coco. Zayda states that the most significant change for her is the strengthening of her capacity as a young leader, who now stands out in defence of the rights of children, adolescents and young people: 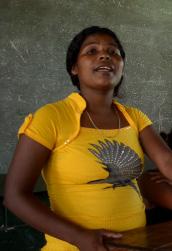 Before I did not know the rights of women … Now we know our rights, we know the mechanisms of how to defend and have our rights respected. We participate … so that justice is done in the face of any type of violence and we make an impact when we visit the city of Waspam to defend our rights.”

In the community … when a project is executed for the common good, the leaders and authorities give us space to work with them, where we take care of the supervision to guarantee that the project is carried out properly. Currently, in our community a nice school is being built and at the end of the work, there will be a saving … [and] the community will decide its [own] investment.

I have never had the opportunity to work with orchards at my home before, only working at large farms. I am happy with my garden. I take care of it as if it were a precious possession. I dedicate exclusive time for the garden every day and the produce that I get from my garden has changed my way of life. My food is more nutritious and I have knowledge of how to make my garden productive. 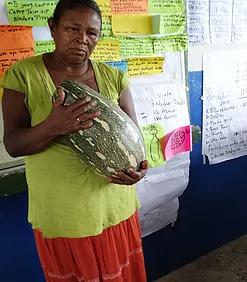 Good Practise: What CEJUDHCAN Has Done

CEJUDHCAN’s education and training activity has focused on:

Among CEJUDHCAN’s most important initiatives are that it has:

CEJUDHCAN has facilitated this process through complementary actions that work together to effect change, such as:

In particular, CEJUDHCAN has achieved these outcomes by:

Ongoing Challenges: among the challenges faced are advancing full implementation of and compliance with Law 445, such as:

A major fear of some communities is that, despite having legal titles, they will not be able to exercise their rights of possession and use, to manage their territories and resources. They point to the need for state policies that support: programs of co-management of protected areas; transparency in financial transfers; phased removal of illegal settlers; financial support for the territories and their communities to develop sustainable programs; and development of communities’ negotiating skills.

CEJUDHCAN works to ensure that public institutions implement the legal basis and process for removing illegal settlers from indigenous territories, in a definitive and lasting manner. This requires territorial restructuring by the State of Nicaragua, in accordance with the requirements established by Article 59 of Law 445. Until now, the Government has progressed the defining and titling of these territories, but not an interagency strategy to conclude the legalization of the territories of Indigenous and African Descent Peoples.

CEJUDHCAN programmes have strengthened community leadership capacities for understanding and adopting the legal framework that supports the territorial rights of indigenous peoples and peoples of African descent, to enable them to be more effective in their engagement with public institutions and other social actors.

In August 2001 CEJUDHCAN, together with other NGOs, attained a judgment in favour of the community of Awas Tingni vs State of Nicaragua, through the Inter-American Court’s human rights system. This importat judgment concluded that the State of Nicaragua had violated the rights of the Awas Tingni Mayangna community, by granting a concession for the exploitation of forest resources in their traditional territory, without the prior consent and by neglecting the constant demands of the Awas Tingni community for the demarcation of their territory.

The judgment resulted in the creation of a mechanism for defining and titling of indigenous territories in the Autonomous Regions of Nicaragua: Law No. 445, The Law of the communal ownership of Indigenous Peoples and Ethnic Communities of the Autonomous Regions of the Atlantic Coast of Nicaragua and the Bocay, Coco, Indio and Maiz rivers. The judgment established the need for the Nicaraguan State to adopt a law that creates procedures to define boundaries and entitle indigenous lands traditionally occupied by these Peoples, to effectively protect their communal property.

Law No. 445 was adopted in 2003. This Law reflects the way in which the collective lands are owned and occupied by indigenous communities and afro-descendent, under a Community scheme in accordance with their customs and traditions, for the collective management of future generations. Law 445 recognizes the traditional communal authorities and provides them with a leading role in the process of defining the boundaries of their traditional communal lands.

Although it is currently not directly involved in permaculture education, CEJUDHCAN fully embodies the ethics of Earth Care, People Care and Fair Share, from local to national levels.

Permaculture principles in action in CEJUDHCAN’s work include:

Design from pattern to detail – understanding the need for legal recognition and frameworks at global region level through the Inter-American Human Rights Court that enable indigenous and ethnic communities to protect and secure their rights at the local level.

Small and slow solutions – building on each step and on small successes, locally, regionally and in the Latin- American global region.

Integrate rather than segregate – CEJUDHCAN works together with other civil society organisations, creating strength to achieve their mutual goals.

Make a small change for the largest effects – whilst the law on indigenous peoples’ land rights is ‘no small feat’, as a single change, secured from within a global human rights system, it can bring potentially huge benefits.

CEJUDHCAN should be a fantastic example to the permaculture world, inspiring us to learn from its example. We can be inspired and seek to emulate in our own projects and movements:

What experience from CEJUDHCAN could help your project, community or network:

b) Training young people and women to participate in local and regional decision making and local government systems?

c) Like CEJUDHCAN, being willing to take on a big vision, big opposition and big challenges, whether nationally, regionally or locally?

CEJUDHCAN is using the £25,000 in funding from the Established Projects Award to address food and water security issues, advance ecological conservation and help complete the final phase of titling, to see the communities given the rights to their land and boundaries set.

Both financially and in terms of the wider sense of recognition and support, the Prize helps CEJUDHCAN in its continual work in the Atlantic coast region of Nicaragua to:

a) establish the legal basis and process for securing idigenous peoples’ land rights;

b) to maintain bottom-up and top-down pressure for the full implementation of the laws to protect these rights; and

c) to deliver training and information which enables indigenous and Africandescent peoples to be more effective in ensuring that their rights and needs are met, whether that be through women’s and young people’s participation in local decision making, or through growing healthy organic food close to home.

To support and keep up to date with CEJUDHCAN’s work, visit the centre’s website at www.cejudhcan.org

CEJUDHCAN is a registered Nicaraguan NGO who mission is to advance the human and ecological rights of indigenous Nicaraguans. It is an indigenous
and women-led organization comprised of twelve staff, including five lawyers.

CEJUDHCAN is funded by international foundations, partner organizations, generous individuals and awards – such as the LUSH Spring Prize – who believe in the rights of indigenous people to their ancestral lands and as the guardians of the remaining tropical forests. CEJUDHCAN was a Lush Spring Prize Established Project Award winner (£25,000) in 2018.

Potential Areas for Collaboration with Project

Collaboration Opportunities: seeking international partners who can contribute work, wisdom and funding to the legal, landscape and leverage strategies that indigenous Nicaraguan communities are employing to secure their future. Specifically, we seek partners to assist with web development, communications, radio programming, photo and video documentation, legal and financial research, and much more. Please contact us if you would like to discuss a collaboration.