La Via Campesina (LVC) was founded in 1993 and involves 164 member organisations in 73 countries from Africa, Asia, Europe and the Americas.

LVC is an autonomous, pluralist and multicultural movement that promotes agroecology as a path to social justice and dignity. LVC defends peasant agriculture against corporate-driven agriculture and trade liberalisation, and upholds Food Sovereignty as a response to the intertwined food and climate crises.

We are working towards a Peasant Rights Declaration currently in negotiation at the UN Human Rights Council.

Download the Via La Campesina case study as a PDF document (1.2 MB)

LVC work globally, in many fields, from on the ground training and support, through to the Peasant Rights Declaration in negotiation at the UN Human Rights Council. The goals of this declaration are to promote food sovereignty and support the development and implementation of socio-economic policies that improve our food and agriculture systems.

It aims to support the creation of public policies in favour of peasants and rural workers in countries where such policies do not exist, to improve existing policies further and give millions of rural peasant communities and workers an international voice. The Declaration includes:

LVC’s work towards the goal of a Declaration of Peasant Rights wouldn’t be possible without their agroecological and food sovereignty education work.

Some examples of this are:

The ‘Winditan Agroecology Training Centre’ run by LVC member organisation Plataforme Paysanne du Niger (PPN) since 2010. With 15 hectares of arable land and facilities for up to 150 trainees, its priority is training women, youth and others in agroecological, post production and facilitation skills to contribute to food sovereignty across Niger. The Centre has trained some 3,000 people, many of which have become active promoters of peasant agroecology across rural Niger.

Amrita Bhoomi, LVC’s South Asia agroecology school (and former Spring Prize winner) in Karnataka state, India  – a 66 acre centre for training peasant farmers in agroecology and Zero Budget Natural Farming – and an established pioneer in the seed and food sovereignty movements, based on self-reliance and self-governance.

A member of LVC’s Association of Rural Workers (ATC), run by about 22 women and involving 79 village families, this is one of the most successful peasant cooperatives in Nicaragua. It is nationally recognised for its agroecological production practices. 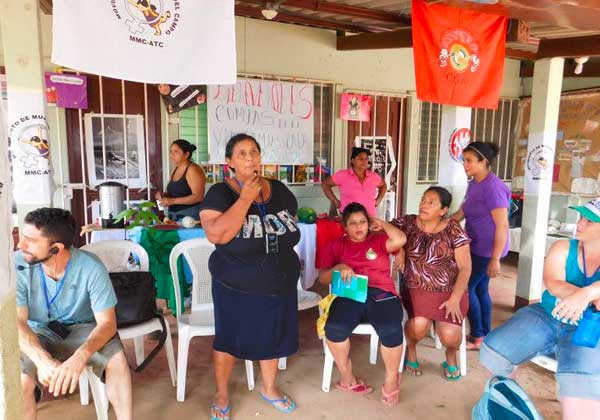 Organic coffee crops are complimented with bananas, plantains, cassava, yam, vegetables, maize etc. Rain water storage for the dry season is a feature, as is training and integration of seed sovereignty, value-adding on crop production, marketing and book-keeping.

The rooms built for training are also used as school classrooms. 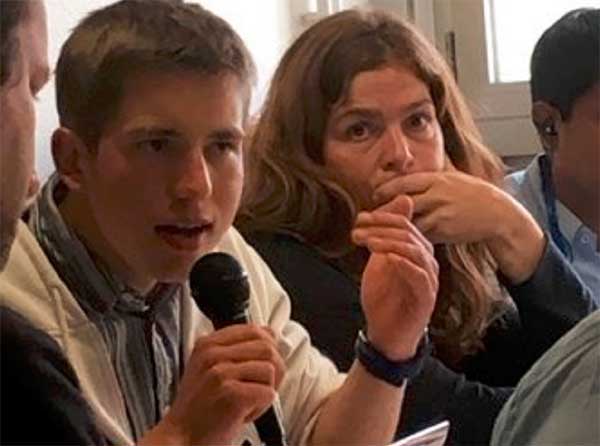 [I] speak on behalf of young European peasant men and women, to convey our message. As an organic goat herder in Belgium, I grow the feed for the goats and make their milk into different cheeses. Today, in Europe, our profession as farmers, and especially as breeders, is under threat. Only ten per cent of us are farmers under forty years of age … many … produce at a loss …[and] are trapped in a development trajectory which is not only very risky in financial terms, but which also … does not correspond to our values.

The declaration on the rights of peasants will support us, by giving us the legal framework for this repeasantisation of agriculture, for this type of rural development led proactively and tirelessly by peasants in Europe and around the world. … [it] is vital to guarantee our inventiveness and innovations … it recognizes our existence, our distinctiveness … the role we play in the food sovereignty of our  communities, in the economic development of the countryside, and the importance we play in our very future, to overcome the global challenges of climate change, international security and, quite simply, to ensure the viable existence of human life on this planet.

Vincent Delobel, member of La Via Campesina, speaking to the intergovernmental working group on a UN declaration, May 2016, Geneva, Palais des Nations.

The many peasants’ stories & the Declaration

Madame Chair-Rapporteur, Delegates of the Council, I am from Palestine … I represent UAWC a member of La Via Campasina in Palestine … the working group for the UN Declaration … is very fundamental to address the discrimination against and towards peasants and other people working in rural areas, and to set the world free from hunger and displacement … The declaration clearly emphasises the protection of the land and seed.

from Al Abudi Ubai Fahmi’s speech to the UNHR Council, on why the Declaration is urgent and important.

Good Practise: What LVC Has Done

LVC’s Ways of Working: How It Is Done

Progress towards the goal of a Declaration of Peasant Rights, is a result of a huge volume of work and an enthusiasm to build and grow the organisation, their capacity and their connections.

Lobbying: concerted lobbying work gives LVC the capacity to change the position of governments, to support or abstain instead of opposing the declaration. This was especially important in Europe. LVC actively participate in the Intergovernmental Working Group and have deepened the commitment to protect and promote of the rights of peasants and rural workers between
governments, organisations and various UN agencies.

A grassroots approach to all work: LVC’s focus and goals are always based around their members and peasant farmers and communities. The work on the ground provides the evidence base that is vital for the case for the Declaration – keeping it cheap and relevant too. LVC have also undertaken a regional consultation process, which has been key for both the negotiating process and for after the declaration is adopted by the UN, to disseminate knowledge and capacity in LVC organisations on how to use it.

A decentralised autonomous structure: LVC is a grassroots mass movement based on the decentralisation of power between all its regions, with its vitality and legitimacy coming from
grassroots peasants’ organisations. Since 1993, the international secretariat has been located in Belgium (1993-1996), Honduras (1997-2004), Indonesia (2005-2013), and Zimbabwe since 2013, according to decisions made at LVC’s four-yearly International Conference, which also defines LVC’s future agenda and actions.

LVC is an autonomous, pluralist, multicultural and multilingual movement: political in its demand for social justice while independent from any political party, economic or other affiliation. LVC connected a global Peasants Rights Declaration with the day-to-day issues facing peasants. Contributions from members, private donations and financial support of some NGOs, foundations and public authorities make this possible.

Documenting and sharing work through many types of publications: these resources are a vital part of LVC’s regional consultation process for building support for the Declaration.  They also build and present the evidence base upon which the Declaration is based – see LVC publications.

Patience and dedication! To achieve their goal, LVC have had to be patient and persistent. Skeptisism and opposition from many governments, multi-nationals and lobbyists “… has made our movement stronger than ever. After sixteen years of effort and dedication, throughout the world, our communities’ expectations of this Declaration keep rising, expecting our demands to be recognised in the intergovernmental negotiations.” Henry Saragih (of LVC), in the closing session of the working group.

Participants of an LVC conference in 2017 in Mali, compiled the following summary:

THREATS: Corporate control of government policies, especially as it relates to agroexport plantations for international investment; land-grabbing by transnational corporations (TNCs); corruption of local and national leaders; many NGOs that speak on behalf of peasants and other rural people without being truly representative; exodus of rural youth to urban areas and/or emigration.

LVC’s outcomes for peasant farmers and communities who are often neglected, under-educated, given no rights or treated illegally and are often the indigenous land occupants:

LVC is continually working with local organisations on how best to use the Declaration to support and expand their work and defend their rights.

Whilst LVC is not directly involved currently in permaculture education, it absolutely embodies the ethics of Earth Care, People Care and Fair Share, from local to global levels.

Permaculture principles in action in LVC’s work include:

Small and slow solutions – building on each step and on small successes, both locally and globally.

Design from pattern to detail – understanding the need for global recognition and frameworks that enable the local communities to achieve much much more.

Use and value diversity – LVC celebrates and works inclusively  with all its local organisations from 81 countries.

Integrate rather than segregate – to achieve the Declaration of Peasant Rights LVC works together with many different organisations and sectors of society.

Make the smallest change for largest effects – whilst the UN Declaration on Peasant Rights is ‘no small feat’, as a single change in a global system it will bring potentially huge benefits.

LVC should be a fantastic example and inspiration to the permaculture world, inspiring us to learn from its example.

We can be inspired and seek to emulate in our own projects and  movement:

What experience from LVC could help your project, community or network:

b) Training young people and small farmers to be teachers, alongside the creation of demonstration sites that relate to local and social needs?

d) Being willing to take on a big vision and big challenges, whether globally like LVC, or nationally, regionally or locally?

The Influence Award from the 2017 Lush Spring Prize has been targeted at supporting LVC’s tireless, passionate and highly commited works toward the successful declaration and adoption
of the UN Declaration for the Rights of Peasants and Other People Working in Rural Areas.

Crucially, both financially and in terms of the wider sense of recognition and support, the Prize helps LVC in its continual work with local organisations on how best to use the Declaration to
support and expand their work and defend their rights.

This includes the work to ensure member states of the UN Human Rights Council adopt the final text of the declaration, and put in place measures to support and protect the full range of rights that it covers.

Founded in 1993 in Belgium, La Via Campesina s a coalition of 182 local and national organisations in 81 countries from Africa, Asia, Europe and the Americas. Altogether it represents about 200 million farmers.

The International Coordinating Committee is represented by one man and one woman per region and one youth per continent, each elected by their respective region’s member organisations. It is an autonomous, pluralist, multicultural movement, political in its demand for social justice while being independent from any political party, economic or other type of affiliation.