For local, national or international organisations and networks that have a core focus on campaigning or lobbying to influence policy, regulation or public opinion in support of regeneration.

It is aimed at supporting those who are changing the context in which we are all working; who are helping to build and strengthen the regenerative movement.

Nominations for the 2021 Prize are now closed. 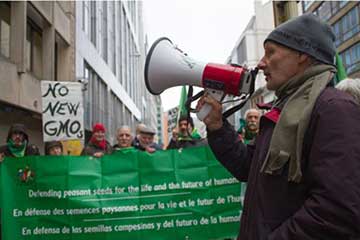 Peasants from the European Coordination Via Campesina, from 16 countries, demonstrate at a march in Brussels against new genetically modified organisms. Picture taken in front of DG Health - EU Commission, on 17 January 2018.